Note: Subway View is only available on iPad.

Subway View is a graphical view that shows events as a series of nodes on intersecting tracks - like a diagram for a Subway network - with events represented as nodes (or stops/stations) and entities representing the tracks. Events are arranged in chronological-order, but the view is non-linear (with respect to time).

This view can help you visualise different elements of your project - people, projects, or story arcs - and how they inter-relate with each other through time, based on the events they share. It shows when characters enter and leave a narrative, or when employees join and leave projects, and how often they interact with others.

The image below shows the individual components of the Subway View.

The components of the interface highlighted in the above image are as follows:

You can choose which tracks to display by tapping on Choose Tracks in the top-left corner of the view. This will show a popover that allows you to select from the entities included in your timeline: 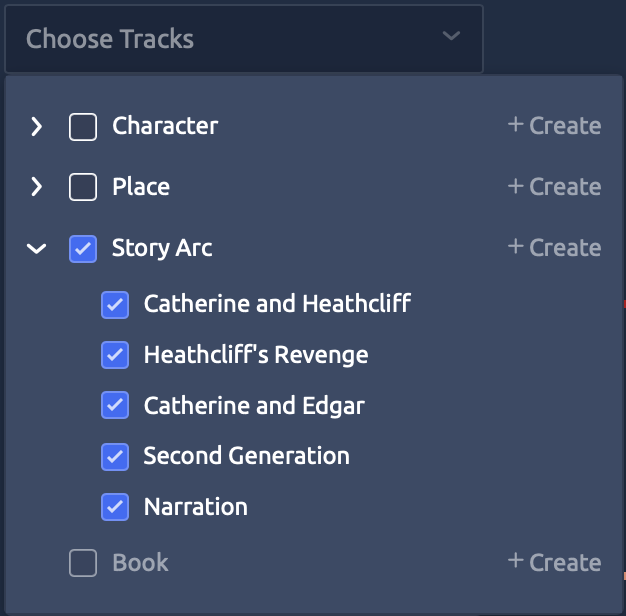 In Subway layout (the default), only a single instance of each node is shown, and tracks will come together and separate as they connect with their associated events:

In Separated layout, each track is separated into its own horizontal line, with separate copies of each node duplicated across each relevant track:

You can select the tracks to show in the subway using the Track Selector in the top-left corner of the view.

In Separated layout mode, entities are shown based on their global sort order. If you want to change the order of tracks, you can open the Entity List Panel and re-order the tracks there.

In Subway layout mode (intersecting tracks), the entity order is an automated calculation that attempts to place the most important tracks (as measured by the number of events associated with that track) in the middle, and the least important tracks at the outer edges. This algorithm tends to keep the focus towards the middle of the subway view, and usually results in fewer track crossovers.

The horizontal order of nodes (entities) in the Subway View is based on the chronological order of events. Subway View is non-linear with respect to time, so events are placed with consistent spacing along the x-axis, regardless of whether those events are separated by hours or centuries.

Within the Subway Body, events are represented in two different ways:

In Subway layout, where each node is drawn only once, the node is placed on the middle-most track that it is associated with.

Although Subway View is not a linear view, you can still drag nodes left or right to move those items in the chronological-based order. This has the same effect as dragging rows up or down in Spreadsheet View, and also the same caveat: since date-based order is always enforced, the date of a dragged item may change if you drag it past another dated item, in order to allow it to be dropped at its new position. Nodes without dates can be dragged into any order without risk (they will not be allocated dates if they do not already have them).

You must be in Edit Mode to drag nodes on Subway View: press and hold on the view until the toolbar changes color.

Like in any of the other views, you can also filter items in Subway View.

In Subway view, each track will still appear as the filter will only be applied to events. This means that if there is a person in your timeline, and all the events relevant to this person have been filtered out, then the person will still show up under ‘Tracks’ column, but there will be no actual track visible on the interface for this person.